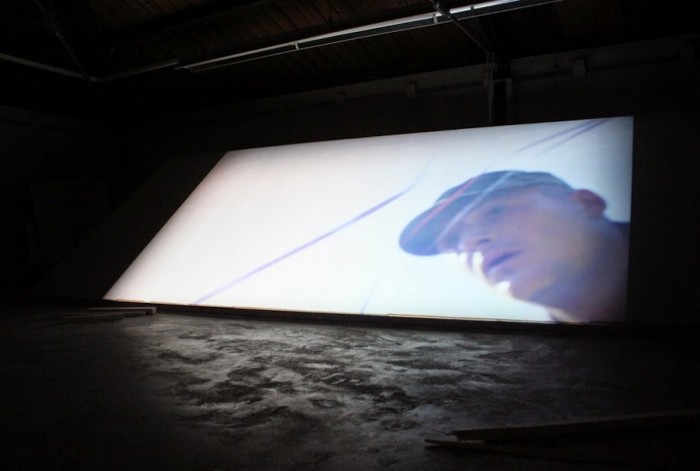 When I first went to northern Ukraine in summer 2012 and spent time with the people living next to the forbidden zone of Chernobyl, I thought that I was arriving at a time that the nuclear accident was sliding from its status of actuality into an object of popular culture. I was curious to know what was the people's intimate perception of it. Mainly what I witnessed was a state of a generalized paranoia – perhaps in continuity with the anarchy that followed the dismantling of the USSR and that chronologically coinciding with the Chernobyl crisis: a network of relations of mistrust. The people mistrusts the authorities, police men mistrust military men and each one hides from each other. Also a form of confusion between the various statuses was very tangible. It seemed that to a certain extent, as if some kind of game of uniforms was on, everyone could become the controller of everyone. Within this context of confusion, I made the film One Spy and One Terrorist, the shooting of which preceded the civil disorders by only few months.

'I recorded on an audio tape a phone call I had with an employee of the Ministry of Emergency Situation of Chernobyl about the causes of the nuclear accident that occurred in 1986. Then I concealed this document in the ground somewhere in the Forbidden zone of Chernobyl. One year later, a team of four young Ukrainian men and a French photographer was hired to dig it out. Following my instructions and guided by the idea that the truth is hidden from them, they turned the courtyard of an abandoned house upside down for one day and one night. '

The film installation confronts the audience with the theme of surveillance and the mechanisms of control related to it. Because dissenting opinions hold a performative quality for me, the film, in its structure, is the expression of the feeling of paranoia that inhabits the place. And as a representation of this reality, the roles of the different protagonists are interchangeable, and the camera is used successively as a tool for showing the progress of an excavation work, as a tool of surveillance or as a mean of control, constantly increasing the number of different perspectives towards the same set and action.